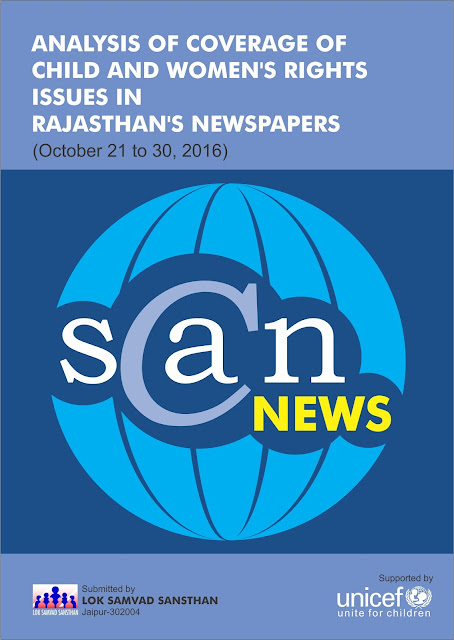 The monitoring and scan of English and Hindi newspapers published from Jaipur, which was started in September 2016, continued till the end of October 2016 with an equal emphasis given to the  regional editions of Hindi newspapers of Rajasthan. In addition to the news items of the State Capital and different parts of the State, the news items of national and international significance from New Delhi and other parts of the country were also scanned and analysed. Thus, the daily scan activities comprised the monitoring of news items in Jaipur, State and National segments.
The whole exercise was taken up in an attempt to understand the trend of coverage of issues related to children and child rights as well as women's rights. A large number of stories appeared in the newspapers in the shape of hard news, features, data, articles, etc. The themes of stories ranged from child labour and child marriage to child abuse, violence against children, discrimination due to caste or economic status, abduction and trafficking of children, malnutrition, right to education, shelter homes, drop-outs from schools and crimes against women.

LIST OF NEWSPAPERS:
For the purpose of this study, the following English and Hindi newspapers published from Jaipur were selected and scanned for publication of news and feature items:


Two leading newspapers – Rajasthan Patrika and Dainik Bhaskar – published from the regional centres such as Jodhpur, Udaipur and Kota, were also scanned in order to monitor their news contents generated at the district level. These newspapers gave a detailed coverage to small events which, despite being significant, are often not covered in the newspapers published from the State Capital.

INFOGRAPHICS:
An impressive display of facts and figures along with pictures, graphs and figures conveys the information to the readers in an easy-to-understand format. The use of infographics for reporting about a health survey in Rajasthan Patrika during the week stated that boys get married at a tender age in a larger number than the girls across the country. The situation of boys in the child marriage cases in Rajasthan is reported to be worse, as 27.5 per cent of boys get married as minors against 14.3 per cent of girls.

UPLOADING ON WEBSITE AND GOOGLE REPORTS:
The news clippings from different newspapers and the daily scan report of news stories are regularly uploaded on the website www.aimec.in for putting these important documents in the public domain in order to spread awareness and generate debates. As the website has a large readership base, this exercise is getting good response. The audience stats report, post stats report and traffic sources report of Google bear testimony to the large viewership of the uploaded material.


Secretary: Lok Samvad Sansthan
Posted by Unknown at 04:40:00 No comments: